Donald Trump recently tweeted that his trip to the middle east has “made and saved the USA many billions of dollars and millions of jobs.” The claim has been roundly criticized by media organizations. Politifact has rated the claim as False i. The Hill noted that “it wasn’t immediately clear to what the president was referring” ii since there were no announced trade deals at the NATO conference and the deal he struck in Suadi Arabia. Since it isn’t known what the president was referring to, it seems the truth-value of the statement could not be ascertained, and The Hill declined to declare it a falsehood. 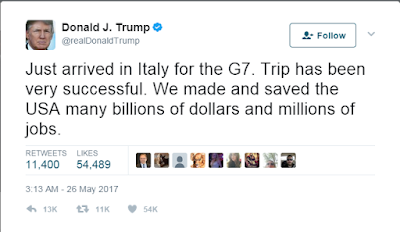 An analysis by The Washington Post iii, however, was not so kind.  The WaPo piece reported that arms maker Raytheon stated they could not guess at the number of jobs that would be created.  Similarly, Lockheed-Martin said only that the deal would “support” iv thousands of jobs and that Boeing stated it would merely “create or sustain” v jobs in both countries.  One intelligence analyst, however, disagrees with all of these fact checkers and reporters.  Mike Hickle is an expert business intelligence analyst with sources inside the GOP Leadership.

DL: So, all of those analyses are wrong?

MH: Not so much wrong as too narrow.   All of these reports really miss out on the big picture.  They are only looking at the few manufacturing jobs that will be created within America in the next business cycle but, when you look at the broader policy implications, the Saudi Arabia deal will have rippling job effects for years, perhaps even decades, beyond.”

This deal will help to support the Saudi regime that has a brutal record of suppressing political dissent and the rights of women and other minorities.  It will, however, help them to keep their two main exports stable.  The first main export from Saudi Arabia that we’ll discuss is oil.  While this deal is billed as part of the Saudi’s efforts to diversify the kingdom’s economy, it will also have the effect of aiding state-sanctioned violence to suppress political dissent.  According to libertarian thinking, this state-sanctioned violence is itself a disruption of market forces that artificially keeps the price of oil lower.

I can see you're confused, so let me expand this line of thought just a bit.  Imagine if the Saudi government did not have a massive police presence to quell dissent.  Not only might that mean that they might have to stop flogging people for having a beer vi, or perhaps wouldn't be able to stone as many gay people to death vii, but would have other consequences as well.  Without a heavy-handed government handing out arbitrary and brutal punishments, there would most likely be an uprise in political dissent that would challenge the monarchy. This challenge would cause the rest of the world to wonder if the supply of oil coming from Saudi Arabia will be stable during the political upheaval, and that uncertainty would cause the price of oil to jump significantly.  Having a large, well-equipped, and partly militarized police force prevents that unrest and keeps oil prices lower.  In the short-term, that keeps energy costs lower in the US and does help promote fossil-fuel sector dependent economic growth.

Lower oil prices will support the fossil fuel industry and makes green energy alternatives slightly less competitive.  This will slow the global economy’s shift to green energy, and that will increase the effects of climate change.

MH: Climate change is an underappreciated job-creation engine that is getting ready to rev up, thanks to Trump’s policies.

You see, sea levels are already rising.  Coastal cities are already seeing jobs created including filling in people’s basements with sand so they can afford home insurance in Norfolk, VA viii and building seawalls, raising roads, and expanding storm drains in Miami, Fl ix. Organizations from the International Monetary Fund x to HuffPost acknowledge that addressing climate change will grow the economy and create jobs xi.

Really, people don’t understand what a great economic opportunity sea level rise is.  FEMA estimates that nearly 24.6 million people live in census block groups that are in the 100-year floodplain xii. With 2.6 people per household xiii, and discounting 50% for people living in multi-unit apartments xiv, gives us 4.7 million homes that will have to be retrofitted for higher seas.  This alone will provide hundreds of thousands of jobs, but let’s be very conservative and call it 100,000 jobs in direct construction, and probably another 100,000 related jobs like making and selling building materials.  That starts us at 200,000 jobs.”

Plus, we know that the longer one puts off cleaning up a mess, the greater the amount of cleanup that will be required.  So, by stalling the switch from fossil fuels, Trump is really just priming the pump for increased long-term job supply to remodel homes to deal with sea level rise.  I’m surprised that Republicans are not openly praising the job-creating leadership here, given that they have claimed that they will improve American job prospects for years now. We can expect a ‘priming effect’ of 10 – 50%, depending on how long we put off seriously addressing climate change. That’s somewhere between 20,000 – 100,000 jobs, but that’s very speculative at the moment so we won’t count it yet.

DL: Is that why he pulled out of the Paris Accord? I thought it was because he lost a handshake to French president Macronxv?

MH: Well, nobody knows why he pulled out for sure, but we do know that pulling out of Paris will be an additional blast to the face in the Trump economy.

DL: First, that’s horribly sad to hear about the increase.  But,second, even doubling that number is still a tiny fraction of the number of people who die in any given year.  Third, how does that create jobs?

MH: The fact that so many more people are dying from heat tells us that there are many other phenomena occurring too, such as heat stroke and heat exhaustion.

DL: And those are good how?

MH: They show a new demand for products and services that our nation can supply.  For example, if people are getting sick because of the heat more often, then there will be an increased need for air conditioners.

DL: Yes, but that Carrier xvii is relocating most of its jobs to Mexico and is automating many others.  Plus, aren’t more than half of those jobs going to Mexico anyway?

DL: Isn’t that a kind of selective statistics like the Texas Sharpshooter that shot at a barn and then painted a bullseye around the area where most of the holes just happened to be?

MH: My sources in Congress say that is just a pessimistic outlook. They want to be positive and focus on jobs!  Speaking of jobs, phenomena like heat exhaustion will create demand for air conditioning, and those new air conditioning installations will have to be done by Americans.

Also, as temperatures rise, it will create increased demand for a variety of new products. With American lawns, for example, we can expect that people will need to purchase more hose and sprinklers.

DL: Yes, but most of those products are already made in China.

MH: Yes, but the retail workers and shelf stockers have to work in America!  Also, we will see demand for new products that will be necessary to deal with the heat.  For example, people will have to get rid of their current lawn mowers and upgrade to lawnmowers that have enclosed cabs with air conditioning.  Some people will even pay for services like having extra insulation added to their homes so that they can afford to run their air conditioning in the summer time.

DL: That all sounds expensive.

MH: That sounds like the hum of a finely tuned job-creating engine!  They predict an additional 100,000 manufacturing and construction jobs from the increased heat.

DL: So, if Republicans are basing job prospects on temperature rise, does that mean . . .

MH: It means that the job climate is just right in America!

DL: And the global climate?

MH: Meh, we have more important things to discuss, like Saudi Arabia’s other main export: Wahabi Islam. We are now up to 300,000 weather-related jobs, by the way.

If you enjoyed this article, feel free to share it on your favorite social media site.  Sharing buttons are at the bottom of this post.  If you'd like to get our posts as soon as they come out, then you can click on the "Follow" button at the upper right side of this page.

Satire Note: Yes, this is actually satire.  Source links are included to show that, even when we make stuff up for pure entertainment, we are still more credible and reality-based than the typical conservative news site.

xivhttp://www.nmhc.org/Content.aspx?id=4708#Structures (Note: the 50% figure is a guess based on this data.)