The Republicans have finally unveiled their new healthcare plan.  It has been greeted with near-unanimous disgust.  Even some on the far right dislike it because it’s not conservative enough.i  Trump claimed that he would replace the ACA with something much better that would cover more people and at less cost. He made big statements like “I’m not going to cut Social Security like every other Republican, and I’m not going to cut Medicare or Medicaid.” ii  Paul Ryan’s plan will break those promises and cover fewer people iii at much higher cost iv.  This plan is bad enough that Trump’s White House has even asked that we not refer to it as TrumpCare. For once, I agree with Trump and think that we liberals should accommodate this request for several reasons.  I would suggest that we label it “RepubliCare” for several reasons, not least of which is that I've already made several memes to help spread the word.  (You can grab them at that link, or copy them from this page.)

First, this is Paul Ryan’s plan, not Trump’s.  Trump is fairly stupid and rather lazy.  Trump promised that he would provide universal coverage with better prices for everyone.v  He’s been promising that since he was campaigning.  This is just like his promise to release his tax returns if he decided to run, a promise that he made before he announced that he’d run.  So, where is Trump’s health care proposal?  Nobody has seen it – just like his taxes.  He has the resources of the entire executive branch and the Republican party at his disposal if he wanted to actually present a plan.  Where are the reports that Trump has even tasked anybody with drafting his proposal?  Nowhere.  Trump doesn’t care and didn’t do the homework he promised to do.  So, it is a little intellectually disingenuous to label it as TrumpCare.

While Trump is not willing to work and not too bright, it is important to remember what he actually is.  He’s clever.  He has mastered the authoritarian handbook of blaming minorities for social problems.  He’s a master at distracting the public and the media with hyperbolic tweets to spread lies.  He’s very good at getting attention.  He’s a reality TV star.  He’s a drama queen.  He will dodge any responsibility for this disaster just like he has dodged responsibility through multiple bankruptcies - financial and moral - throughout his entire life.   As far as keeping with conservative principles, he’s a RINO – a Republican In Name Only.  Robert Reich wrote about a conversation he had with a Republican friend where the Republican said that they will tolerate Trump for as long as they must, then they will “pull the trigger”vi and get rid of him. This makes it crucial that we don’t pin this growing policy fiasco on Trump, but on the Republicans in general.

If the Russian collusion is as bad as it appears to be, then Trump will be removed eventually.  He is also doing enough with stupidly written executive orders and baby-Nazi spokesmen who claim he “won’t be questioned” that he will get himself removed.  We won’t get rid of Trump because he’s crazy or mentally incompetent.  There is no quick fix for this and need to face political reality: it is nearly impossible that Trump will be removed from office in the near future. 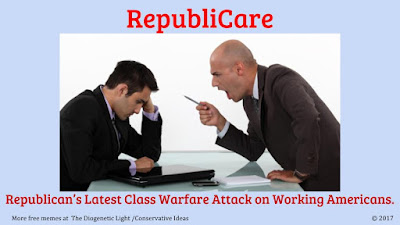 Let’s look at Watergate for some guidance.  Nixon’s “Plumbers” got caught breaking into the DNC headquarters in June of 1972.  Nixon was re-elected in November of 1972 and beat McGovern by one of the largest electoral landslides in history.  It wasn’t until August 1974 that Nixon finally resigned – over 2 years later.  So, we cannot focus on a quick fix, and must instead think about the long game.

Right now, even though his poll numbers are the lowest recorded since pollsters started tracking presidential approval, he still has very solid Republican support and most of his base is still solidly behind him.  That’s not to say that all of Trump’s base is still behind him.  I’ve seen a half-dozen or so news reports that some of his supporters now truly regret voting for him, but that’s not enough.  In order to get rid of Trump, our goal needs to be twofold: eroding Trump’s support and eroding support for the GOP more generally.  Because of Watergate, Republicans lost 49 seats in the House and 4 in the Senate.vii  Those gains would be enough to swing both houses of congress back to the Democrats if they can capitalize on Trump’s many and growing scandals.  If Republicans take that large of a hit in 2018, then several other things will happen that will help get rid of Trump.

First, a loss like that would ensure that even a president Pence will be nothing more than a lame duck.  Even taking just one house of congress would be enough to hamstring the Republican’s most destructive ideas.  The Republicans are also standing behind Trump right now because they are riding high on an incredible victory that nobody predicted.  If they take a beating at the polls in 2018, especially if that beating can be attributed to Trump’s unpopularity pulling them down, then their loyalty to him will be severely diminished if not crushed.  Get rid of a bunch of Republicans, and those remaining will be more willing to get rid of Trump, if for no other reason than to save their own political careers.  Again, it’s a win-win.

To accomplish this, we need to damage Republican credibility in general. Pinning this “health care” atrocity on the Republicans will help diminish their credibility.  Also, since Trump’s staff have requested that we don’t call it TrumpCare, a RepubliCare label will drive home the fact that Trump is not willing to be part of the Republican party – that he’s a RINO.  He wants all the adulation but is not willing to shoulder any of the workload to earn it.  That should cause just as much a loss of support for Trump on capitol hill as the bad ratings of actually having his name attached to it through “TrumpCare.”  The only difference is that we damage Republicans more generally in the process.  Even Charlie Sheen would admire that level of winning. 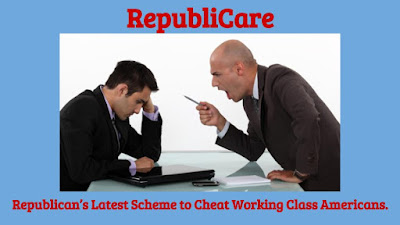 Once we get RepubliCare hung around the Republican’s necks like the foul, rotting albatross that it is, we can start hammering them on their values.  They claim that they are the party of freedom.  Well, by causing prices and the numbers of uninsured people to skyrocket, they are ensuring that we all have the freedom to suffer and die if we aren’t lucky enough to be rich.  Republicans are always preaching about responsibility.  Yet the 30% penalty makes it even easier for people to duck their responsibility to be insured.  Lifting the caps on what percentage of premiums insurers must pay as part of a plan's coverage and allowing insurers to offer junk plans will ensure that more and more people wait to buy insurance until they get sick.  That will make prices skyrocket into a death spiral.  This is a big enough disaster that America won’t support it if they know the truth.  The question is this: who will be accountable for this disaster?  Will it be Trump, the charlatan who has made a career out of cheating his employees and subcontractors?  (He will probably blame it on Ryan anyway.)  Or will it be the Republicans generally (whom we can then remind that they were abandoned by Trump on this)?  This is Paul Ryan’s baby, so I say that we make him carry it until it’s so politically toxic that the Republicans are forced to abort the idea*.  That’s a win in any progressive’s book.

*That abortion reference was intentionally offensive.  It was made to mirror the offensiveness of this train wreck attack on the middle class by Republicans.

Next: Why is the Republican messaging machine so effective?  What are the rules that make it work?  We get into that topic in RepubliCare - Working the Word, pt 1.

If you enjoyed this article, please consider clicking the Share button below.  You can also follow this blog by clicking on the Follow button to the right.  Thank you for reading!

Edit (3/22/17):  We continue to get a lot positive feedback on this article and the slogan: "RepubliCare - the Republican Wealthcare Program."  If you agree with the points I make in this series, then please send this to your Democratic Senators and Representatives at both the federal and state levels.  If you're in a red area, I would like to say send it to the Democratic National Committee, but they have NO way to contact them.  Below are links to find your representatives and senators.


viihttps://en.wikipedia.org/wiki/United_States_elections,_1974
Posted by Diogenes at 10:37 AM