This is the third part of a series of posts that began with Don't Call It TrumpCare, and RepubliCare - Working the Word pt 1.  These two Working the Word posts use the RepubliCare topic as a primer into part of the political messaging system that Republicans have used for decades.  We ended the last installment after covering Luntz’ first three rules of effective messaging: simplicity, brevity, and credibility.  A good message must first be simple, short, and true.  Those three rules provide a solid groundwork for any effective message.  In this installment,  we will finish up the rest of the rules.  These rules focus on shaping a message for memorability and how to get it out effectively.  We begin with the fourth rule.

The fourth rule: “Consistency. Repetition, Repetition, Repetition.  You may be hearing the message for the 1,000th time, but someone else is hearing it for the first time.”  How often have we heard the Republican solution for anything is a tax cut?  How often have we liberals said that you can shout a lie a million times and it doesn’t make it true?  Yet, we liberals still cannot understand why so many people fall for the Republican lines?  Like it or not, their messaging works.

This rule makes sense if we think about it.  We all remember playing the telephone game as kids where each person in a line is supposed to whisper an exact repetition of what was whispered to them in the next person’s ear.  It doesn’t take much to completely change the message as it goes down the line.  One person changes one word here, the next person doesn’t understand that change and so repeats the line in a way that makes more sense, and so on down the line.  We have all experienced how a single message can get mangle.  How can we expect to convey a consistent message when we start out with 10 different variations of the message?

I understand the value of being able to explain issues in different ways for different people to understand.  That, however, is the job of explaining the message.  First, we need to get people to pay attention with a strong and consistent message encapsulated within effective slogans.  If the message works, then don’t change it.  We need to be unified now more than ever.  Even if you think your version of the message may be a little better, we are still more effective as a unified front than as a cacophony of chaotic voices.  As a childhood friend was fond of saying, “If it’s not fixed, don’t break it.”  Stay on message.

If you’re reading this, you’re most likely an intellectual progressive liberal and are starting to bristle at the idea of conforming for the sake of conformity.  Let’s look at this in a different way.  We know that music is much more memorable than just spoken words.  Music affects our brains in ways that the normal spoken word cannot.  Music is also repetitive.  How often have you only been able to remember the chorus of a song?  Think of slogans as the chorus of a song.  They are the part that hook you and catch your interest.  The verses of the song really tell the story.  For messaging, the slogans and sound bites are the chorus, but the discussion is in the verses.  They aren’t quite as memorable, but the song is missing its heart without them.

Music is also unifying.  Would it make sense if everyone just made up their own words to a song?  Would you want to hear a song if the band members each made up their own words for every chorus?  We need to sing together in order to get that message out.  Sometimes songwriters will change a verse after a song is first published.  That’s okay.  That’s our discourse with others.  We need to change that in order to connect with the other person in their unique circumstances.  You can tweak the verse, but stay consistent with the chorus.

The fifth rule is “Novelty: Offer Something New.”  We all want new experiences.  That’s part of what keeps life interesting.  When crafting the message, we must ask how can we combine surprise and intrigue in the message?  However, once a novel message is created – stay with it.  If it’s not broke, don’t fix it. Be consistent. Repeat. See #4.

The sixth rule is that “Sound and Texture Matter.”  Alliteration (the same first sound among several words), the same first letter, or a cadence will help make a slogan memorable.  While teaching English abroad, I noticed that there is a rhythm to language, and the rhythm of language is musical. (Words that Work says this too.)  We should design our messages so that the words flow and roll off the tongue easily.  That fluidity, that musicality, helps people to remember the message, and that’s one of the first steps to persuading them. 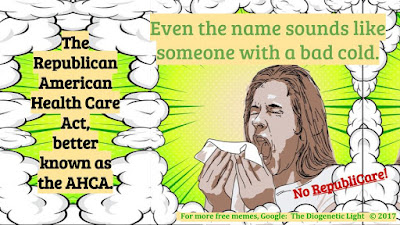 The seventh rule is “Aspirational Speaking.”  We must humanize the message by making it apply to the human condition in general, then personalize it by applying the message to listener’s personal experiences.  If the message is credible and makes logical sense, then it will make sense in the mind.  The next step to getting it accepted is to get listeners to feel its truth in their guts.  How can we find a way to trigger an emotional response? How do we show it is part of the human condition? How do we show that it can affect them personally?


The eighth rule is “Visualize.”  There are a few simple ways to structure the message so that it paints a picture in the listener’s mind.  Use action words in the active voice.  A simple way to do this is to look for prepositions and try to find a way to say the same thing without those prepositions.  For example, don’t say that the “The proposal that was designed by Mr. Ryan seems to have the effect of causing millions of people to lose their health insurance.  Instead, “Ryan’s plan will deny healthcare to millions.” Compare those two sentences.  We drop from 23 words to 7 in the second sentence.  This is also consistent with the first two rules: keep it short and simple.

One other technique that I’ve seen is to mix the senses.  Something like “a taste you can feel,” is an oddly effective way to describe the richness of a cup of coffee.  For RepubliCare, we might combine our senses in a slightly different way and say “RepubliCare – a broken promise has never cut so deep or hurt so bad.”

The ninth rule is to “Ask a question.”  Statements and assertions can invite an argument, but questions demand contemplation.  If I say to someone that “RepubliCare is likely to will cause 24 million people to lose their health insurance according to the CBO,” then a Trump supporter could reply that they should just learn to budget their money better, or not buy an iPhone (like an idiotic Republican congressman did).  However, if I ask that person if “you think it’s OK if your neighbors and parents are part of the 24 million people that suffer because they lose their health insurance?”, then I’ve totally changed the conversation. I’ve followed the seventh rule by humanizing and personalizing it. By including the word “suffer” I’ve employed the eighth rule and begun to make it a proposition that they can visualize, and I further the visualization by personalizing and asking about people close to the listener.  Notice too, that once you read a question, you must stop for just a moment to make sense of the question (which requires visualizing it in your mind) before you can respond.

(By the way, as we discuss in other articles, we don't need to persuade very many Trump supporters to gut his support.  Also, you won't always win people over, even with good dialogue and persuasive techniques.  That's ok.) 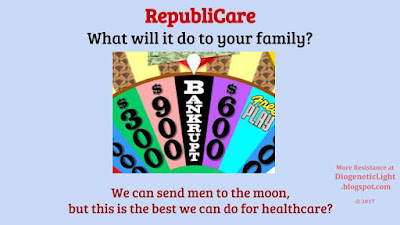 The tenth and final rule of Words that Work is to “Provide Context and Explain Relevance.”  Another way is to call it framing the issue, but Mr. Luntz prefers to use context and relevance.  For context, we must put this issue into the big picture.  Luntz uses James Carville’s slogan of “it’s the economy, stupid” as a great example of this.  It was never intended to be a slogan, but only a reminder for campaign staff to focus on.  In Luntz’ examples, I see that the best slogans also capture the zeitgeist – the spirit of the times – in the message. 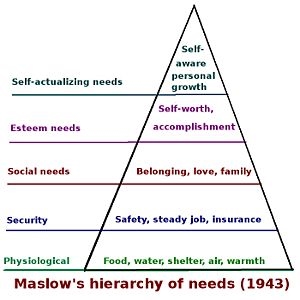 The other part of this last rule is to explain the relevance to the listener: what motivates the decision for the listener?  During the ‘92 election, Carville knew it was the economy.  Luntz suggests that “safety, security, & peace of mind” will always be of primary importance in motivating listeners.   It seems that what Luntz pointing to is something like Maslow’s hierarchy of needs.  Safety and security rest in the first two levels of the hierarchy. Peace of mind and Carville’s focus on the economy are a little more vague and seem to touch on all the levels at once.  This copies of Maslow’s hierarchy, below, should be a useful tool to help us focus on ways to get our message across to others. 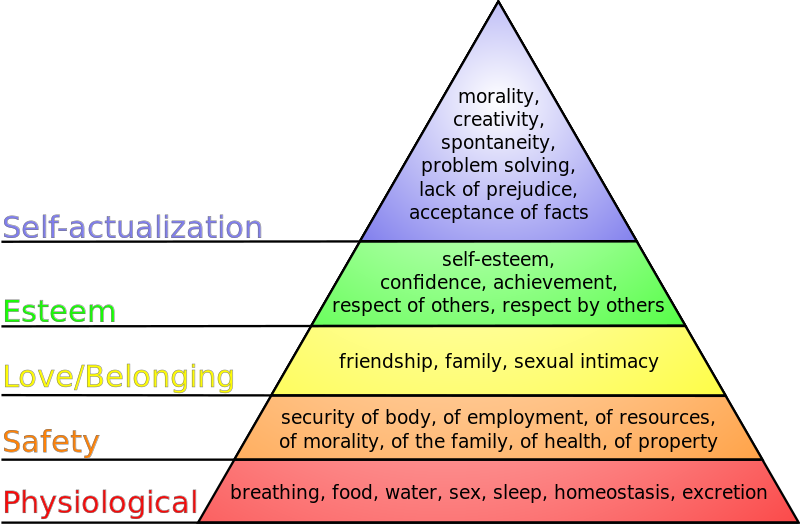 That wraps it up on the rules for effective messaging from Words that Work.  In the next article, we will take a look at how those rules apply to RepubliCare.

As always, thank you for taking the time to read this piece.  Feel free to grab any of the memes from this article to repost on social media.  There are others in a few different meme stashes on the blog too.  If you think others would benefit from this article, there is a share button at the bottom of the page.  If you'd like to get new articles as soon as they come out, there is a "Follow" button at the top right.