Potholes and Trolls in the Road to Hell


We reported earlier on how some Trump Trolls Manufactured a Massive Hack & Hijack Attack Against Facebook groups.  These groups have all been Anti-Trump, Progressive, or Liberal (APL) groups.  In this article series, we will take a closer look at how The Road to Hell is Paved with Republicans (Road to Hell) was hacked.  In this post, we’ll look at how Melissa, the group creator, and her admin team grew the Road to Hell into one of the largest APL groups on Facebook.  In the next posts, we will take a closer look at how the hijackings occurred.  Hopefully, these stories will help others to protect themselves from trolls.

Melissa has lived in sunny Georgia since she was born. It’s a nice place to be unless you’re a progressive during election season.  As this election and its historic Republican extremism heated up, Melissa found herself surrounded by vociferous Trump and Cruz supporters.  As the rhetoric became more extreme, which happened at the very beginning of the election season, Melissa decided to create the Road to Hell is Paved with Republicans in order to be around like-minded people and learn more about the electoral process.

For about 11 months, she only had about 70 people in the group.  Melissa was concerned about creating an environment that supported open discussion, so every member of the group’s profile was vetted to keep trolls out.  Then, suddenly, during the week of the election, something sparked in the group and it began growing like wildfire.  The Road to Hell became a superhighway and went from 70 members to over 33,000 by the end of November.  It became one of the largest APL groups on Facebook.  “I went from 3 requests a day to over 800 a day overnight,” she says, “It was crazy.” 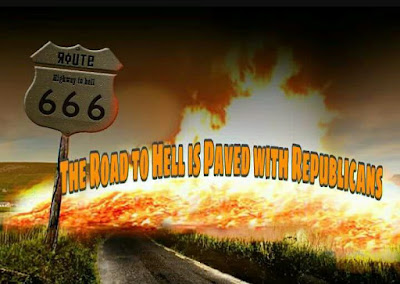 To accommodate the exploding membership, she added 6 more administrators to her group.  She became friends with all of her group's admin on Facebook (real friends, not just Facebook friends), and most of them she met through her group.  Even though the site vetting was just looking through Facebook profiles to make sure that trolls didn’t get into the group, it was quite time-consuming with around 800 new member requests every day.

They were also busy making sure that people remained civil in the group.  This usually meant removing offensive folks, and, for the really obnoxious and obscene ones, blocking them so that they could not ask for re-entry.  “Everyday I removed people from the group; every day I blocked people,” Melissa recalls, “and that was just me. I had several other admins doing the same thing.”  “Even through all that people were still coming by the hundreds daily.  It was crazy -- and exciting.  I couldn't believe that many people were interested in my little anti-trump Hillary group.”

Looking back, there was one weakness in vetting people that could have been a problem.  Some people requesting to join the group had their profiles set to private, and nothing could be seen from those people. “It was a judgment call to let them in,” Melissa said, acknowledging the weakness. “When you have a group with 33k you will understand what I mean by the amount of work it takes to vet these people.  We are not always going to get it right. Clearly.”

Looking back, though, she still believes that they ran the group well.  “You have to ask yourself, ‘what kind of group do you want?’ And for me, I wanted a fun group but we still get the message out.  The message of what is happening in congress, etc.”

She expected that people who should not have been let into the group would be removed by the administrators, so there was a backup to the vetting system.  What they all expected was that they would be screening out Trump supporters who would be obnoxious in the group.  Nobody expected that they would have to screen out malicious hackers.  Further, it’s one thing to try to screen out merely obnoxious people from a group, but how does one screen out hackers who roam freely on the internet and Facebook?  (Note: We will explain in the next post how vetting the group members was not the route that the trolls took to hijack the group.)

Melissa and her admin friends had created a vibrant online community and grew it as organically as a cyber group can grow.  “I never promoted it. Not once,” Melissa says, “Some admins from other groups would ask me if it was ok if they could promote their group in my group.  I always said yes, but not once did I promote mine in other groups.”  Melissa knew that the way they moderated the group was important.  “It became 33k because people were genuinely interested and they liked the vibe of my group,” she adds.

The hacking came as a complete surprise.  After extensive discussion with Melissa and research, we have determined that there are 3 possible scenarios to her being hacked and the group hijacked: either malicious code, a mole, or a mercenary. We will explore each in turn in the next two articles.

Melissa has great memories from creating the group. “It's something I’ll never forget.  That was my baby. I grew it from nothing – and now it’s gone. The damage is done.  It’s over.”  However, that won’t stop her.  “So here we are, back at it,” she says, “I'm OK if we never even break 400 in the new group.  My entire point through all of this is to send the message that we will not stop.   They can try and silence us all they want, but I won't stop.  I won't stop standing up for what I believe is right.   Even if we only had 10 members, I would be just as happy because I know that ultimately I kept it moving forward.   As one of my icons, John Lewis, the congressman and civil right leader has said many times, ‘We will not stop.’  That is my biggest message to the public.  We will not stop.”

As we reported in our first article on the hacks, Trump Trolls Manufacture Massive Hack & Hijack Against Facebook, these attacks are not merely just "messing with people."  They are an assault on political speech, which deserves the most respect and protection under our Constitutional values.  It is also an assault on the freedom of assembly.  The two go hand in hand.  People often need the freedom afforded within a group of like-minded individuals to discuss and debate ideas with before they discuss them with people holding contrary opinions.  This is no different from sports teams practicing before they go out to compete.

These trolls have no respect for our cherished American values, and they apparently have no ideas that can withstand a competition of ideas.  So, instead of learning and thinking of new ideas, they instead choose to attack the people and attack the forum.  They seem to be inspired by the brutish, fear-based message of Trump.  These attacks are nothing more than acts of stupidity, malice, and cowardice.  Louis Brandeis, scholar and Supreme Court justice said it well:

“Those who won our independence by revolution were not cowards. They did not fear political change.  They did not exalt order at the cost of liberty.  To courageous, self-reliant men, with confidence in the power of free and fearless reasoning applied through the processes of popular government, no danger flowing from speech can be deemed clear and present, unless the incidence of the evil apprehended is so imminent that it may befall before there is opportunity for full discussion.  If there be time to expose through discussion the falsehood and fallacies, to avert the evil by the processes of education, the remedy to be applied is more speech, not enforced silence.”

The next post in this series, Malware, Mole, or Mercenary will begin to explore the mechanics of how the trolls hijacked Melissa's group.

If you're interested in learning how liberals can get better at messaging to win the war of ideas, check out the 4 part series starting with:
Don't Call It TrumpCare